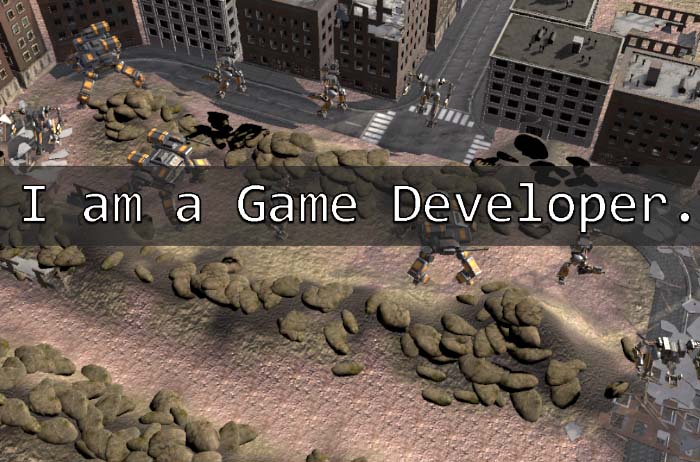 Well, it has certainly been a long, strange trip to get to the point that I can pretty confidently say it, but here it is again in case the title wasn’t enough: “I am a game developer.” Feels good to finally say (or write) it!

I’m not going to get too into the weeds of my history in my first post, but I do want to mention where this road began. I started “programming” games back in 1997 in Microsoft QBasic. My buddy had borrowed a QBasic programming book from the library, and he programmed a text based game where you walk into a cave and choose to go left or right, and then randomly you either win or get eaten by a dragon.

After checking out the game he programmed, we started downloading any QBasic games we could find from AOL. One of the cool things about games in QBasic was for most of them you’d just download the source code and then run it in the QBasic compiler/interpreter. This meant that it was super easy to just download a game and then modify it. We had downloaded a Jurassic park text based game that was pretty similar to those old choose-your-own-adventure books (instead of “Go to page 100” it was “GOTO 100”).

Around the same time, we went up to the boardwalk in our beach town to go see Air Force One in the movie theater. Air Force One was rated R, but this was back before the South Park movie so we were able to get in without a parent or guardian. Being 12 or 13 years old, we were totally stoked about what a badass Harrison Ford was in that movie, so when we got home and onto the computer we quickly took to modifying that Jurassic Park game into an Air Force One game (and of course, it culminated with the player yelling “GET OFF MY PLANE!”).

That was my first game, or at least my first modded game. From there I got into programming and studied it through high school, made some Half-Life and Counter-strike maps, and even went to college for game programming. I took to programming in general pretty well (HTML, JavaScript, ASP, SQL, VB, VBA, C++ and now C# are some of the languages I’ve worked with), but a lot of the actual object-oriented stuff and how to actually make a game always kind of eluded me.

That is, until 22 or so years after the journey began when I found GameDevHQ and Unity.

In the beginning of 2020, I had just gotten myself comfortable with playing guitar after deciding to learn how to play in August of 2019. I was feeling pretty great that I was able to pick up something like that with just some online lessons and coaching rather quickly. So, since I had pretty much accomplished my goal of “being able to play a few tunes around a campfire”, I set my sights on my next topic to really dive into and learn.

I went on Udemy and found Jonathan Weinberger’s Ultimate Guide to Game Development with Unity 2019. Through that, I was introduced to Jon’s website GameDevHQ and quickly signed up since it seemed like such a good deal. Spoiler alert, it was!

The first course I dove into was the 2D Game Development course. The course is designed to show you the basics of getting around Unity, and it is taught while actually building a space shooter game yourself throughout the course. I found Jonathan’s style of teaching very effective, as he often challenges you to create solutions for problems that come up in many of the lessons on your own. Then, after each challenge, he shows how he would solve those same problems, which oftentimes were different than the way I solved the same issue (and that’s ok, in programming there are almost always many different ways to solve any problem).

It only took me a few weeks to get pretty comfortable with Unity. I had almost finished the 2D Space Shooter course when a couple things happened:

I was feeling pretty good about my progress with Unity, and so I decided to put my skills to the test and try to build a game in about 10 days. The game jam theme was “Unconventional Weapons” with bonus points for using toilet paper (it was during those dark times when the shelves were empty). I quickly ran through a couple of the other courses on GameDevHQ, and started up my first real 3D project.

Part of the challenge of the jam was to use only assets from GameDevHQ’s Filebase (not really a challenge per se, as Filebase has TONS of assets you can use to make cool games and is TOTALLY worth the $99 a year, just saying!). Up until this point, I had not used Filebase all that often, but dove in head first for this game jam.

In the next 9 or 10 days, I had created a first person shooter game called THE SANITIZER with 3 weapons (and a flashlight!), health powerups and ammo pickups, 2 enemy types, 2 full levels, and a boss fight. I also did some voice acting myself for the game. I was pretty proud of what I had accomplished in a pretty short amount of time, and moreover was absolutely floored at the amount I learned while doing it. It was during the making of this game that things really started to click for me. There was a community vote to determine the winner of the game jam, and I placed second. Not bad for a still relatively new Unity developer!https://cdn.embedly.com/widgets/media.html?src=https%3A%2F%2Fwww.youtube.com%2Fembed%2FsJC3xAGkU7E%3Ffeature%3Doembed&display_name=YouTube&url=https%3A%2F%2Fwww.youtube.com%2Fwatch%3Fv%3DsJC3xAGkU7E&image=https%3A%2F%2Fi.ytimg.com%2Fvi%2FsJC3xAGkU7E%2Fhqdefault.jpg&key=a19fcc184b9711e1b4764040d3dc5c07&type=text%2Fhtml&schema=youtube

From there I spent the past year experimenting with various projects and assets. I participated in a few game jams and have generally learned a ton. More on some of these projects in future posts.

All that kind of brings me to where I am now. I’ve put out a few game jam games, I have a few on-going projects that I am working on, and I recently signed up for and started GameDevHQ’s Intensive Training program to really take my C# coding and game development skills to the next level.

I am only a couple days into the program at the time of this writing, but I have already picked up a few things and I am excited to continue learning! In this course we are building a tower defense game, and I am focusing on learning to write the most performant code possible, as that is one area that I know I can improve on. Looking forward to where the journey takes me next, but at this point, seeing as how I have created a few games now, I’ll say it one more time, just for kicks: I am a game developer.